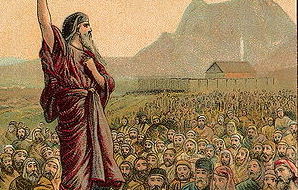 The most famous sentence in the Torah is found in this week’s Torah portion, Va’etchanan: “Hear O Israel, the Lord our God, the Lord is One.” (Deuteronomy 6:4) The last letter (Ayin) of the Hebrew word for “Hear” (Shema) is written large, as is the last letter (Daled)of the Hebrew word for “One” (Echad). What’s the significance of these deviations?

Rabbi Avi Weiss proposes a unique explanation: Maybe the letters are large to teach us that the smallest of deviations could pervert the meaning of a text. For example, if one would read the Shema as having an Aleph as its last letter (after all the Aleph and Ayin are both silent letters), the word Shema would mean “perhaps” (sheh-mah). This would change a firm declaration of belief into an expression of doubt! And if the Daled would be mistaken for a Reish (after all, there is only a slight difference in the writing of a Daled and Reish), the word echad (One) would be read acher (other). This would change belief in One God into a belief in two gods!

As we move towards Rosh Hashanah and Yom Kippur, all of us ought be careful with every word, every gesture and every action. Because in life, the smallest differences makes all the difference in the world.