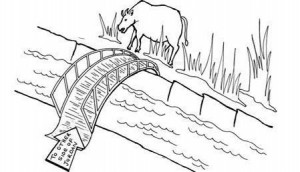 From Dan Lifshitz: “There was much livestock belonging to Bnei (the children of) Reuven and Bnei Gad – very much… Bnei Gad and Bnei Reuven came and said to Moshe…” These two tribes asked Moshe if they could remain in the rich pasture lands on the east side of the Jordan River rather than cross the Jordan to dwell in Israel proper.  The Kli Yakar (cited in Talelei Orot) notes that in describing this request, Bnei Gad are mentioned first, as if they were the leaders of the delegation.  Reuven was Yaakov’s first born son and his tribe was one of the more prominent; they should have led the delegation.  Why did Bnei Gad take the lead?

Kli Yakar says that the answer can be found in the first verse we cited.  Both tribes had abundant livestock, but Bnei Gad had “very much” – the last two words refer back only to them and not to both tribes.  However, the reason they took the lead was not because they had more of a need for pasture land as a result of a greater number of sheep.  Rather, their superior wealth engendered a perception of superior importance:  Reuven was the first born?  Doesn’t matter, we are richer and hence we should speak first.  Kli Yakar explains that this is an unfortunate but common tendency.  People, especially the wealthy, often believe that wealth automatically confers great status and is more meaningful than other standards.  The Torah is warning us against this mentality, which is a risk in our time, just as it was back then.
Share this…