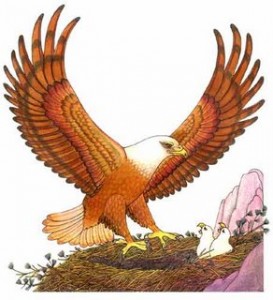 Parshat Haazinu is Moshe’s last speech, delivered as a song because songs reach deeper into our souls. In the beginning of the song (32:4), it says “The Rock! – Perfect is his work, for all his paths are justice; a G-d of faith without iniquity, righteous and fair is He”. This statement is loaded, saying that Hashem is perfect, just, fair, righteous, and without iniquity. What’s strange is that it begins with comparing G-d to a rock, and then saying that G-d’s work is perfect! What’s the Torah trying to tell us by mentioning a rock, and by using all those terms? Luckily, the Chafetz Chaim answers one question with a story about having faith:

A man had an only son that was sick, and spared no expense finding him a cure. One doctor finally cured the boy, and told the father that the son got sick because of certain meat that he ate. The father vowed to keep that meat away from his son. Years passed, the father had to go away on a business trip, and he had his family watch the boy. After he left, the boy was tempted by the smell of the meat, ate some, and became deathly ill again. When the father returned, he called the doctor and begged him to do all he could. Once again the doctor was successful in healing the boy, and the father decided to never leave his son again. A while later the father had a party (with meat), and when the son walked in, the father quickly rushed him out. The guests all watched in wonderment, but they didn’t understand that it was for the son’s sake.

We are the guests, wondering why things are happening in our lives, but we now know that G-d’s work is just, fair, and perfect as a ROCK in every way! But a rock is not perfect, you say? Well, it may not be perfect in shape or color, but it’s solid, consistent, and always grounded, which are the qualities G-d shows us, and the very qualities we should emulate this coming year! By this time next year, may we all be ROCK Jews, in every sense of BOTH words!